Virlanie combats malnutrition in communities together with Risen Savior Missions 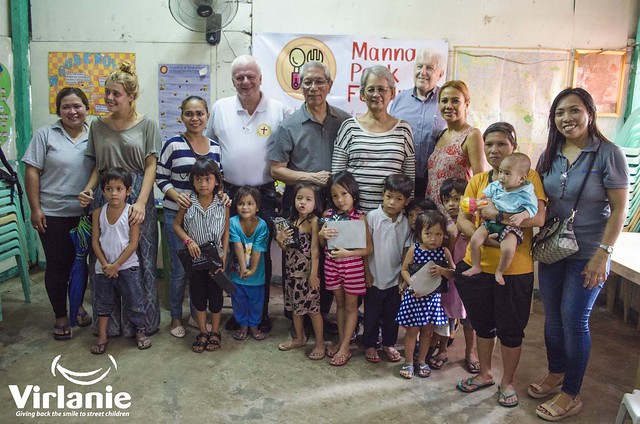 The typical breakfast menu in Elsa’s (38) household usually consists of a cup of coffee shared among her 5 school-age children and her husband, excluding her infant who is nursed with a local powdered milk formula.

“Halimbawa, isang sachet ng kape, isang tasa sa amin. Share-share na kami ron, mainitan lang ang sikmura (For example, we all share one cup of coffee so we could warm our stomachs),” Elsa shares, with her daughter Erika shyly sitting beside her in her school uniform, ready to take her Math exam that afternoon.

In Gina’s (40) household, on the other hand, the most common food you can find at her family’s dining table at lunch is a hot serving of instant noodles, and, if she and her husband had luckily earned more for that week, fish. Elsa and Gina are just two of the mothers whose families are assisted by Virlanie’s community development program Brgy. Bagong Silangan, Quezon City- a far-flung barangay in the city.

Families from this rural community in Quezon City are often the ones who are unable to serve nutritious food at the table because of their limited budget. This inadequacy of daily nutrition necessary for a child’s growth and development results in malnutrition, more specifically, undernutrition- such is evident in the cases of Joy Ann (7) and Erika (6), daughters of Elsa and Gina, respectively.

According to the National Nutrition Council (NNC), 3.8 million children who are stunted for their age, while 807, 057 are wasted or underweight by 2017. Malnutrition refers to deficiencies, excesses or imbalances in a person’s intake of energy and/or nutrients (World Health Organization, 2016), this hinders individuals, especially children, from physical and behavioral development.

Virlanie, in partnership with Risen Savior Missions through our generous donors, worked together to begin addressing this issue, one community at a time through the MannaPack feeding implementation done through the I Feed program.

MannaPack is a more nutritious rice meal with additional vitamins, soy protein, and dehydrated vegetables produced by Feed My Starving Children, a non-profit Christian organization based in Minnesota, packaged by its volunteers, and distributed in different countries all over the world; in the Philippines, the Manna Packs are distributed by Risen Savior Missions.

“Risen Savior Missions aims to bring nutrition to malnourished children of the Philippines,” Rodolfo Fermin, friend of Rotary and volunteer of Risen Savior Missions with his wife, says, “a prime example is the province of Marinduque which was adopted by RSM six years ago. When the nutrition program started there, the malnutrition rate was 25%. After six years, the rate was down to 3%,” he continues.

In partnership with one of Virlanie’s long-time supporter and friend of 25 years, Sir Karl McLean, a Knights Templar, together with Marc Martin, the program was conceived to help alleviate malnutrition in Virlanie’s assisted communities.

“When I came across MannaPack feeding program via Marc Martin and Rod Fermin, I immediately thought of Virlanie,” Sir Karl says, “We were all so thrilled to see the plan of action introduced by Virlanie and it made all of us so proud that we could (do) our little bit to help the poor children.”

According to them, they had been captivated by the work of the Foundation for children, and wanted to bring the good work Risen Savior Missions does for malnourished children all over the world to the children of Virlanie’s assisted families.

Both Joy Ann and Erika gained weight and, compared to their shy and aloof demeanor prior to the feeding, became more social and active in school and towards peers. Their mothers, Gina and Elsa, volunteered during the feeding program to encourage other mothers in Bagong Silangan participate.

Over the duration of the program, 79 children from Bagong Silangan had been served with MannaPack meals.

For updates on this story, stay tuned to our news page or subscribe to our monthly newsletters. You may also help support our campaign for total healthcare by donating at http://ushare.unionbankph.com/virlanie/.