Likhaya selected as one of Makesense Academy’s incubatees

Likhaya, Virlanie’s social enterprise, debuted with six other social startups and enterprises which made it to Makesense Academy’s second batch of incubatees for its 6-month incubation program at Sensenight, last May 15 at Social House, Ayala Malls, Circuit Makati. Sensenight is an evening for these startups to introduce themselves through creative pitches and conversations.

Makesense Academy trains and supports early stage social entrepreneurs through customized mentorship and workshops with experts, tools, and resources based on the incubatees’ needs. This year, through a tedious process of selection, it recognizes its second batch of incubates. Out of the 96 initial applicants, 12 went through to the final pitching stage at the Philippine Business for Social Progress office in Intramuros with jurors representing development, corporate, government, and entrepreneurship sectors; and seven, including Likhaya, were selected.

“Before we were asked what was our goal before the incubation program, and we said that the goal of Likhaya is to make our business model sustainable and scalable, and to strengthen the brand (of Likhaya),” says Mary Antonette Flores or Toni, Virlanie’s Social Entrepreneurship Manager.

Makesense Academny is a program of Makesense, an international non-profit organization that brings together social entrepreneurs and organizations to engage them in building impact-driven projects for a more sustainable and inclusive communities and world.
“So right now we’re at the learning stage. We’re conducting interviews again, focus group discussions with our beneficiaries and partner companies. And then the next step would be the testing phase to test our hypotheses until we could see how we could structure Likhaya better,” says Flores.

This support will help Likhaya improve its business models and operations by capacitating its staff to further empower its mothers and young women beneficiaries. Likhaya staff are being trained to encourage beneficiaries to participate in discussions and consultations in improving the program so that they can have a more stable source of livelihood.

The mothers will also undergo a three-step empowerment program taught by Makesense which gradually lets them level up from mastering the craft, becoming team leaders of new trainees, and eventually becoming entrepreneurs themselves.

“…this space to study everything and take a step back will allow us to really go down and ask the community “is this really solving your problem?”, “what are the real problems out there?”, “how could we better improve Likhaya?” This is aligned with how I envisioned Likhaya to be—to be as participatory as possible. And so it was hard because of all the things that are happening but undergoing this structured program allows us to conduct it now and now we’re going back there so they could hopefully understand the process better and then they would feel that they are consulted, and that they can participate not just by crafting but in terms of improving the program itself,” she adds.

Likhaya by Virlanie will receive free customized support through comprehensive trainings, collaborative programs, a monthly allowance, and a coworking space which will give them access to tailor-fit solutions and activities to further strengthen and improve their enterprises’ business models for six months.

Upon receiving the news that Likhaya was selected as one of the incubates and presenters at Sensenight, Flores was lit with excitement.
The preparations for the final pitch/presentation for Sensenight included writing a creative script which tells the stories of the mothers invited to demonstrate their craft of creating accessories from upcycled magazines.

“We asked ate Marie kung sinong nanay yung pwedeng sumama samin. So sinundo ni Marine yung mga nanay from Mobile Unit to here, then nagmeeting kami, inexplain naming sa kanila yung mangyayari, wag kayong mahiya, magcraft lang kayo sa stage, and super cool kasi hindi talaga sila nahiya (We asked who among the mother beneficiaries could join us. So Marine fetched them (from Tondo) and we had a meeting, them we explained what will happen, and they shouldn’t be shy and just continue to do what they do while onstage, and it’s super cool because they weren’t shy at all!). You see them and it’s like nobody else was there,” Toni says.

All the participants were given ample time to practice their pitches at the Social House, and despite already being used to participating in public speaking engagements, Flores was nervous, but being with the mother beneficiaries of Likhaya up on stage gave her the boost to tell their stories to the audience.

“I think the hardest part is it’s not just a speech, I should say it in a way that Emelita (mother beneficiary) would really say it,” she says.

“I was so happy and after all that we went through, we won. Likhaya really needs it. Because we’re here in the office while we’re running the business, it’s hard to take a step back and see “is this still good?”, or “should we go to the community again?”, (to) reevaluate our assumptions, “should we do it another way?” So I know that Makesense would give us that opportunity to conceptualize better or rethink everything. This made me really happy.”

See photos and videos of the Makesense Night here: 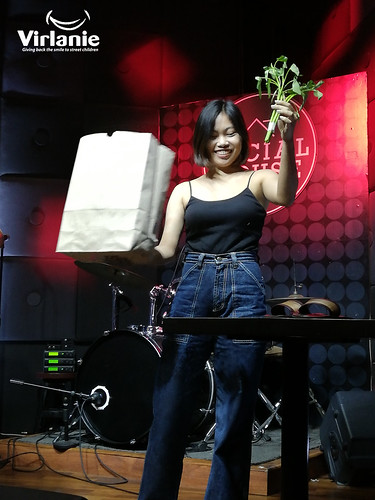