Giving up is not an option: The Story of Teresita Tuazon

Teresita visited the Virlanie office in Makati, last June 16, 2020. She is like any ordinary girl who wears a nice simple dress, a pair of wedged sandals, and wears accessories to accentuate her beauty. That day, she was accompanied by her mom that served as her eyes. Teresita has been blind since she was in third year high school and it is the most challenging experience that their family has gone through ever since. However, her blindness has made her learn new things in life, and she learned how to make her blindness be part of her identity, which something made her become stronger in facing new obstacles in life. 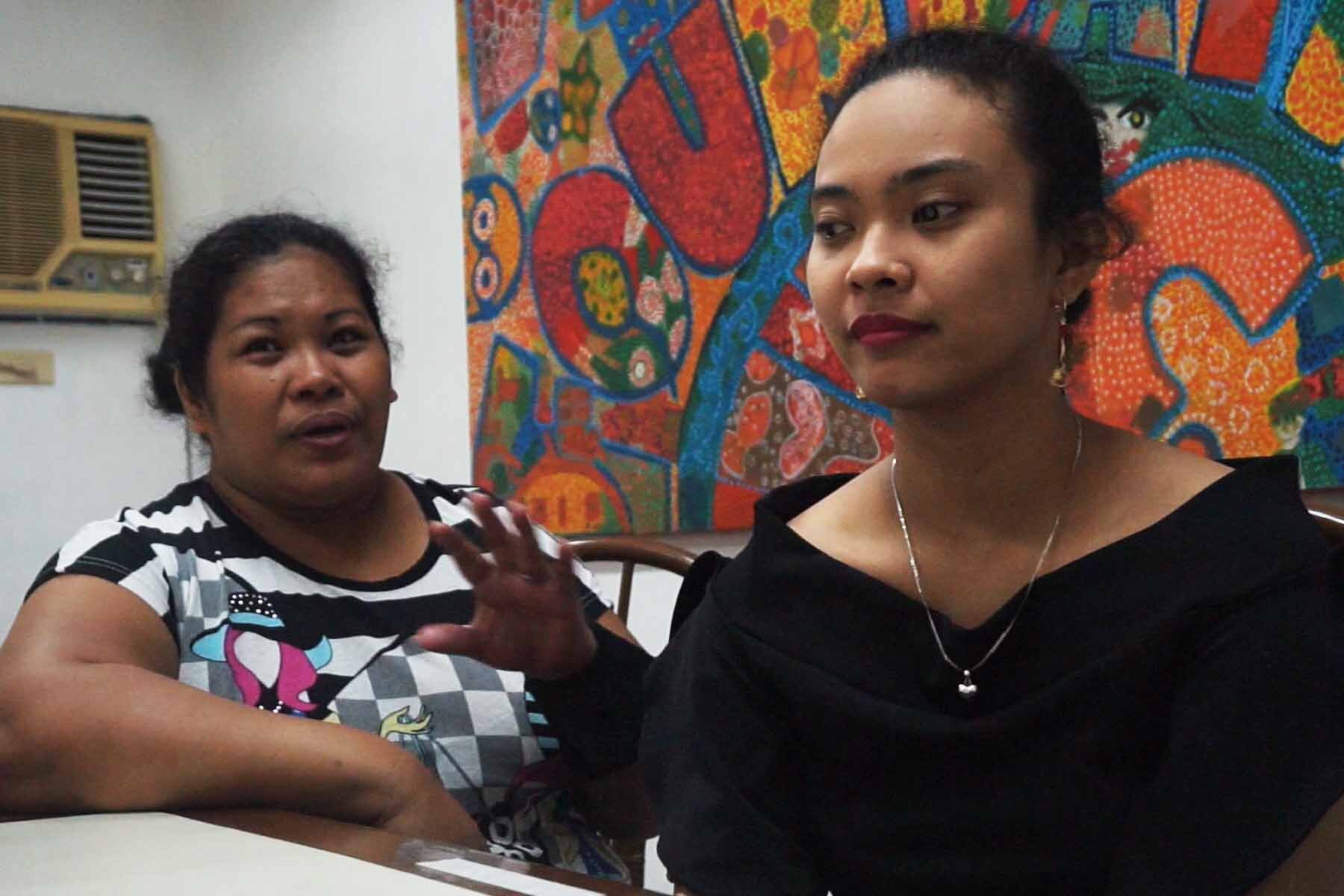 Teresita and her mother Edelina, during the interview

“I don’t exactly remember how I got recruited to become a Virlanie beneficiary. It was my mom who was involved during that process. What I remember was, having tutorial classes every Saturday, being asked to write letters for our supporters, and sharing our grades we got from school,” Teresita said.

Virlanie was able to assist Teresita’s educational expenses for her school projects, and assignments that needs to be done. She said that her family was not able to afford much for her school projects back then. “Those small allowances given to me are a very big help especially to my parents who do not have a stable job, my father used to work as a security guard who was only a minimum wage earner,” she added.

Virlanie was able to help her with her eye check-ups and surgery when she was starting to have eye problems. “Virlanie helped me a lot when it comes to my hospitalization back then. They helped me with my surgery and medications. To some extent, I thought Virlanie will no longer help me after all the things they have provided me. I believed that there is no more disabled beneficiary except for me. After I got blind, I felt hopeless. I even asked myself how Virlanie can help me if I can no longer give what they need from me? How can I excel to my classes?” a tearful Teresita expressed her story. 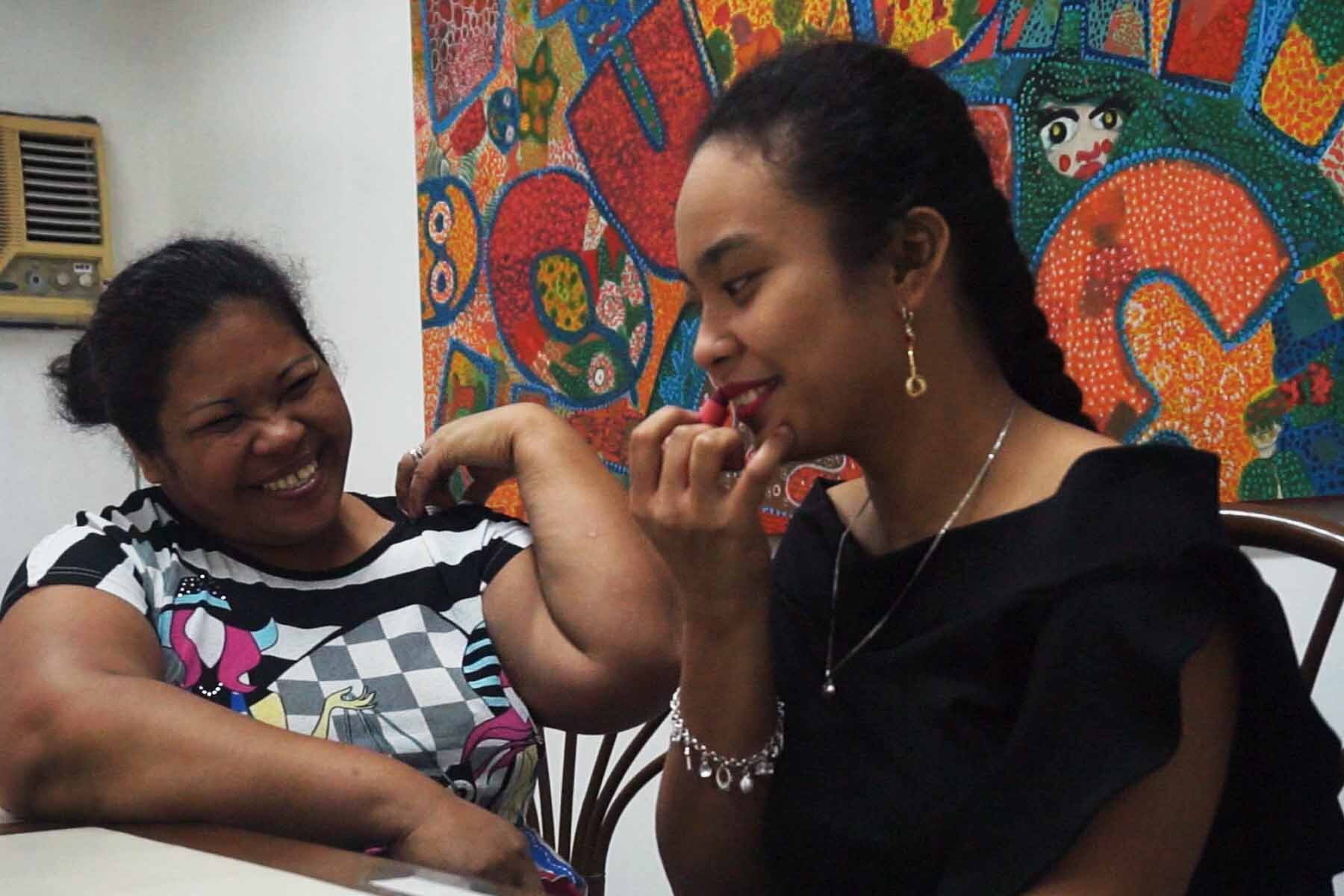 When she knew that her eye operation was unsuccessful, she temporarily stopped her studies on the next school year. Virlanie made sure that she will still be a productive individual despite not going to school at that time. She served as a massage therapist for a while as an alternative activity until she decided to pursue her college studies.

“Virlanie has always been with me until now, and until I got my degree in Early Childhood Education. They helped me to pursue my studies, even though I am visually-impaired, they did not judge me, they did not think I am incapable; but instead, they gave me a chance, an opportunity to prove that despite of my disability, I can excel and I can achieve all my dreams in life.” She said.

Teresita and her mom, Ate Edelina has been taking smiling breaks once in a while during the interview session. This is for them to relax after an emotional moment, telling their stories to Virlanie.

Teresita and her mom sharing smiles during the interview.

“We actually didn’t expect that she will be blind. But there is this one time when she came home from school, she took a nap, and when she woke up, she’s screaming from her room telling us that she cannot see anything,” Mommy Edelina said. “At first, her blindness was so painful for us. I even asked the heavens why this happened to her. It came to the point where she locked herself in the bathroom and she is about to stab herself with a knife, attempting to commit suicide. I just told her that we can surpass this test. God has never given us something we cannot surpass. We can do this; we should hold on together. If you’re about to give up, I will be the one to fight for you, no matter what it is. I will not give up and will never ever give up on you.” Her mother added.

Teresita has experienced a lot of challenges being blind or visually impaired. One time, her mother entrusted her to a group of classmates to assist her in participating to a class project. However, Teresita was not able to reach her destination as she was left behind, and alone in a train station in Manila. Her mother was able to rescue her from her location. Another challenge was going to her school for her classes during a bad weather. It came to a point where a teacher was about to fail her because she cannot attend a class for a subject.

“Sometimes, I really have to fight for my daughter because I need to. I have to let them know that Teresita should be treated well as they do not know anything about Teresita.” Teresita’s mother said.

Teresita thought she was safe from bullying. She was bullied when she was Fourth Year high school from fellow blind classmates where she did not expect to happen. That time, she was having a hard time adjusting to read and communicate as a recently blind person. However, this made her become dedicated to learning how to read braille to help her with her studies.

“I persevered to learn reading by braille until I get to read and study independently. Eventually, I was able to catch up with my lessons, then I became a consistent honor student, then I graduated with First Honors. All my hard works paid off when I graduated High School. That time, I learned that whoever tries to bring you down, they are not an excuse for you to give up and excel.” Teresita said.

When she was in college, she is struggling with using technology. It is the time where she must learn how to use the PowerPoint through a computer to make her academic presentations. She must learn this by using a screen reader that is used by blind people like her. She also experienced bullying and discrimination from her classmates and professors.

“There was a time when people don’t really bully you physically or verbally. They bully you emotionally.” Teresita said. “You’ll just feel it on how they treat you. Most of them say, they forget about my disability, and I did not look that blind to them.” She said. “There is one professor who I failed to meet his expectations. He shouted at me in front of my students during my demo. I feel traumatized, to the extent I already want to stop. He told me that my blindness is not an excuse to perform well. I realized that even though he treats me hard, I became thankful because I realized that you should be the one to initiate to learn and to understand new things.” She added.

This year, Teresita plans to take the Licensure Exam for Teachers (LET) to become a full-pledged teacher by profession. She also wants to become a public-school teacher and teach disabled students like her. She envisions herself to taking up graduate and post-graduate degrees in the future when she is finally capable of doing so financially. She also has a lot of dreams for her family, she plans to help in supporting her siblings financially until they finish their studies and give back to her family by giving something they want to have materially.

Check out this video to learn about her story:

Teresita is a believer of Inclusive Education particularly for those students who have disability just like her. For her, Inclusive Education comes with a great responsibility. Teachers and schools must be equipped with the right resources and trainings so that they can give proper education regardless who their students are.

She believes teachers should be well-equipped and must learn how to handle students who have disabilities. They should know what their needs are and give the right interventions they should provide to these students. “In my college, I was invited to join a round-table discussion where they ask us to give our opinions to help them how to make our school friendly toward students with disability like us.” She said.

The Virlanie Give 2 Achieve Campaign

Every year, Virlanie Foundation has been advocating for its supporters to come together to give value for Inclusive Education. Give2Achieve is a signature campaign of Virlanie that encourages supporters to help every child learn. This year, Give 2 Achieve will be a little bit different, and the Foundation is preparing for everyone to brace themselves on the upcoming activities about Inclusive Education.

One of the activities to expect is the first ever, Virlanie Virtual Run in partnership with VirtualRunPH. Through virtual run, you can become a child advocate and inclusive education advocate by becoming an active athlete for children. Express your support by running long miles in support for children who needs all the education and learning we can offer. You can also get a chance to fund for a child’s tutorial sessions or even fund for an educational equipment for a child.

If you are also interested to set your own fundraising campaign for a child’s education, you can check out this link. You can also sponsor a child for a more personal support to a child.